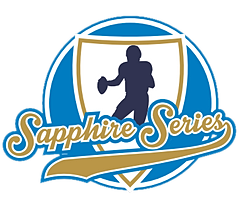 Nerves and excitement were definitely present with the Valkyries even days before the opening of Sapphire Series took place. Had we trained enough? Do we know enough? Especially for the rookies who had only 6 hours of training, there were questions as to how the day was going to go. And it turns out, we did brilliantly! We had far surpassed the expectations that we held against ourselves in both games; Winning our first game against another newly formed team Staffordshire Surge, and holding back an experienced team in the league, Sandwell Steelers, from overwhelming us on the scoring board. One win, one loss, but a hell of a lot of experience to take into the next round.

Although Surge lost their first game, there was no doubt in our heads that they would likely want to get the next win against the new team like themselves. This was our first ever contact game, so we had no idea what to expect. But we prepared for this game like any flag game we have took part in: remember the basics, have fun support each other.

From a defensive standpoint, you could clearly see all off the classroom sessions get to work. Rookies and vets alike were in the right places, aggressively running players out of the field, making individual tackles, or successfully swarming the opposition until pressured to the floor. In particular Elleanor and Zoe were aggressive in their tackles; refusing to let go once the tackle was initiated and always on the hunt. With both oppositional teams have a majority run game (and some very strong runners!), our defence proved to set back their potential scoring opportunities.

On the offensive side there were many things to celebrate. Rookie Ruth and Vikki both scored touchdowns, but in particular it was the fast scuttling feet of Beetle (Beth) which saw massive running efforts, making yard and yard and of course a touchdown. Being recognised as potentially one of the toughest running backs in the league, Beetle certainly is one to look out for. Of course we can’t forget the efforts of rookie Mandy as guard and the endless ball control of centre Maria. Maria also scored a conversion.

Going into the second game straight after the first, the team were of course tired and bruised. Not to mention the cold wind and rain making things worse for everyone – slippery balls and sniffly noses! However, we persisted with a positive attitude and went into the second game with a fresh mind but the same mental outlook; just have fun! We knew that we were in for a tough challenge. The Steelers’ ladies really knew how to hit and knew the game. But again, we surprised ourselves how capable we were as a new team taking on an experienced team.

Defence once more showed relentless effort in hunting down the ball; constantly swarming the ball. In the first half linebacker Zoe scored a safety, getting the team 2 points. Controlling the end-zone as well, making an interception and hitting hard enough to drive back the ball for the next down.

Due to an incident on another pitch, there was an issue as to whether the second half of the games could go forward. The medical team had to escort a player to hospital, and so medical cover issues arose. However, Vikki kindly de-kitted so that both games could continue. Thank you, Vikki! (And a speedy recovery)

As for the offense, things got very exciting. Of course Beetle’s talents again certainly showed during both games, but it was especially against the tough defensive players of Steelers that her drive and skills truly shined. Being the only running back due to Vikki de-kitting in the second half, poor Beetle still never seemed to run out of fumes; pushing and pushing for each yard. In addition, centre Maria caught the ball and ploughed her way through several Steelers who latched on to her. Making several yards with several bodies, the toughness of Maria is certainly second to none.

Although we lost 14-4, there is no doubt that we proved difficult for their running game.

In both games the endless work of QB Kira was evident, making long passes and throws always under pressure, facing many potential blitzes. Again, as with opal Series, Kira proved to have talented hips, dodging several blitz attempts and keeping calm under pressure.

Swapping back and forth between offense and defence were the speedy Lois and rookies Sheryl, Emily, and Holly. All of these payers showed a bottomless amount of energy, constantly running and blocking and always looking for the ball.

A big well done to everyone and as always, we would like to say a massive thank you to both teams we played. As we progress as a team we learn more and more, and it’s thanks to those we compete against. Particularly friendly teams like Surge and Steelers, who compliment and encourage our strengths for the next games! Let’s just hope it’s a little warmer next time.